When you buy meat, you've likely noticed the absorbent food pad that comes in the packaging, and you've thrown it away without giving it any thought other than trying not to drip meat juice all over yourself, the floor, or the counter. However, the absorbent food pad actually does serve an important purpose.

The reason it's there is not surprising — it's to soak up liquids from the meat or poultry to prevent them from pooling in the package. This serves multiple purposes. For one, it makes the cooking process less messy, which is important for hygiene in the home (via MyRecipes). It is also a food safety measure. The liquids from meat, unappetizingly referred to as "purge," can contain bacteria, and by absorbing the liquids, it prevents as much live bacteria as possible from leaking, as well as preserving the meat or poultry because the liquid would otherwise cause more bacteria to grow. This would increase the risk of foodborne illnesses.

The absorbent food pads are made from specific forms of paper with a plastic liner, according to the U.S. Department of Agriculture (USDA), the agency in charge of the production, packaging, and safety standards of food made in the United States.

The packaging is regulated and overseen by the Food and Drug Administration (FDA) to ensure that it doesn't contain harmful chemicals. Every piece of material that goes into meat or poultry packaging has to be individually petitioned and approved by the agency before it can be put into the pack with meat (via USDA).

As a result of the regulatory process, these pads that can hold up to 40 grams of liquid are generally safe. While eating the absorbent food pad is obviously not recommended, if you find that it sticks to your meat and you accidentally cook it, so long as the absorbent food pad isn't melted, torn, or broken open after the meat has been cooked, the meat is still safe to eat. Any bacteria that may have lingered on the pad would have been killed during the cooking process. Just remove the remaining bits and enjoy your meal.

Even if you do accidentally ingest a piece of the absorbent food pad, it isn't digestible so it should move straight through your digestive tract without breaking down so you will likely be fine though best to try to avoid it in the first place. 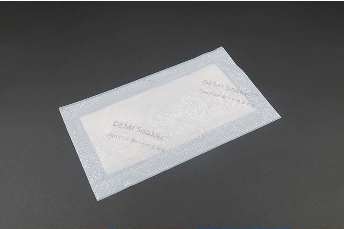